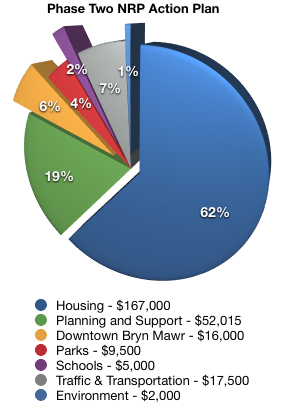 Bryn Mawr began writing its Phase 2 Neighborhood Action Plan in January 2005 and, thanks to the work of numerous neighbors, the plan was completed and approved by the NRP Policy Board and Minneapolis City Council in March 2006.

Less funding has been made available in Phase 2, compared with Phase I, both as intended and as a result of governmental budgeting shortfalls. At the time of Phase 1 Action Plan approval, Minneapolis NRP had allocated $270,080 to Bryn Mawr for Phase II programs. As a continued requirement, through legislative mandate, 70% of program dollars city-wide were required to be invested in housing programs.

The graph to the right shows the breakdown of the original Phase 2 NRP Action Plan that was approved in March 2006.

The BMNA was notified in early 2007 that Bryn Mawr had approximately $61,000 left over from its NRP Phase 1 Plan. The BMNA Board voted to roll these funds over into the Phase 2 Action Plan strategies. The budget increase these funds promised was short-lived, however, as NRP funding for Phase 2 was reduced for all neighborhoods in December 2007, due to budget shortfalls by the city and State of Minnesota. Consequently, Bryn Mawr’s total NRP funds were reduced further for Phase 2.

It is important to note that the strategies for the Phase 2 Action Plan were not modified; only the amount of funding was changed. It should also be noted that the funds Bryn Mawr allocated for Housing had already been spent by the time city finalized its budget recommendations for the NRP in January 2008.

Focus Survey Results
The following links document the comments received from neighbors at the focus meeting events and at the Bryn Mawr NRP Planning Committee meetings:

Focus Group Results
The following links summarize the comments received from neighbors based on the specific issue and on the area in which residents live. This input directly influenced the strategies documented and approved for the Phase 2 Action Plan:
Crime and Safety
Traffic and Safety
Downtown
Seniors
Youth
Anwatin
Housing
Renters
Schools, Parks, Recreation and Community
Area 1
Area 2
Area 3
Area 4
Area 5
Area 6
Area 7

Work to Date on Phase 2 Implementation

Work on executing the Phase 2 Action plan began in earnest in June 2006 and continues to this day! Just as in Phase 2, volunteers continue to step forward and serve on committees or work on projects to implement the Phase 2 NRP strategies. Some of the highlights of Phase 2 thus far include:

Housing Committee
The BMNA Housing Committee met monthly from July through December 2006 to discuss housing issues in Bryn Mawr, and identify ways of executing on the Phase 1 Action Plan. The committee succeeded in rolling out the Bryn Mawr Home Improvement program in May of 2007. Just as in Phase 1, the Center for Energy and Environment (CEE) was selected as the program administrator for the Phase 2 Program. Approximately 21 Bryn Mawr households were awarded grants and/or no interest loans. Applicants were awarded funds based on their financial need and on the severity of the issues uncovered during the home inspection (e.g., homes with electrical code violations and leaking roofs were given priority over peeling paint). These projects, when completed, will not only improve the quality of life for the individual home owners who were awarded, but will also increase home values for everyone in Bryn Mawr.

School Committee
The School Committee was formed in July of 2006 to address educational issues affecting Bryn Mawr residents. Since that time, the committee has met, as needed, to provide a useful forum where neighbors can raise education-related issues. The committee has met with a school board member to discuss Bryn Mawr needs, and has addressed several bussing issues, which affect school choice options available to neighborhood residents. Through research and discussion, the Schools Committee arrives at, and suggests, courses of action directed toward improving our community. The School Committee strives to keep community members alert and informed on school issues and activities that affect the community. The School Committee will also make recommendations to the BMNA Board regarding school issues.

The strategies for the Committee, as stated in the NRP Phase 2 Plan, include the following:
To increase cooperation between Minneapolis Park & Recreation Board and Minneapolis Public Schools
To increase the safety of schools and enhance the existing playground
To support Bryn Mawr Elementary and Anwatin Middle Schools and ECFE
To support Minneapolis Kids and Sports Arts program
To provide a framework to facilitate discussion about the educational choices offered to the families in the neighborhood.
To act as informed advisors to the BMNA on educational issues affecting the Bryn Mawr Neighborhood.
To help the BMNA Executive Board execute the NRP plan as it relates to schools.

Traffic & Transportation Committee
Work continued on implementing ways to calm traffic, improve pedestrian safety in Bryn Mawr and monitor transportation issues that impact the neighborhood. Members of the Traffic & Transportation Committee have met repeatedly with city and county officials to look for ways to work together and to ensure our voice is heard. The Committee has also submitted proposals to a variety of grants to obtain funds for improving pedestrian and bike access in Brym Mawr.

Some key city- or county-wide issues or projects that the Committee has monitored and offered recommendations on include the proposed Southwest Transit Way (LRT), the Minneapolis Freeway Study, the Bassetts Creek Valley Redevelopment Oversight Committee, and transportation issues around the new Twins Ballpark.

Within the neighborhood, the Committee’s efforts are principally focused on calming traffic and improving pedestrian safety, specifically around I-394 and Penn Ave South.

Problematic Streets and Freeways
I-394 divides the neighborhood and limits the access that Bryn Mawr neighbors have to the Cedar Lake Trail. I-394 also brings high speed and heavy traffic to what is otherwise a very quiet neighborhood.
Penn Ave carries over 10,000 vehicles per day from I-394 to South Cedar Lake Rd and another 5,000 vehicles each day from South Cedar Lake Rd to Glenwood Ave. Trucks and cars entering the neighborhood on these streets are frequently observed traveling at speeds exceeding the posted speeds (30 mph).

Other problematic streets include West Chestnut Ave from Penn Ave to Xerxes Ave and Ewing Ave, from Franklin Ave to the Brownie Lake Bridge.

Penn Ave & Cedar Lake Rd intersection
In May 2007, the BMNA and Bryn Mawr NRP Traffic Committee asked the City to have the temporary stop signs permanently installed at the intersection of Penn Ave and South Cedar Lake Rd (replacing the traffic signal lights). The neighborhood was asked to voice their opinion (by phone or email to the City and BMNA) on whether the signs should be made permanent; the response was overwhelmingly in favor of making the stop signs permanent.

However, the BMNA believes that crosswalks and pedestrian scale lighting are still needed at this intersection, to reinforce the perception that this is a pedestrian zone.

Sidewalks
The Traffic Committee believes that every street in Bryn Mawr should have a sidewalk, and yet, compared with other Minneapolis neighborhoods, Bryn Mawr has a dearth of sidewalks lining its streets. Here is the official map from the city showing where streets in Bryn Mawr lack a sidewalk on either one or both sides of the street.

Proposals were submitted to the City of Minneapolis and Minneapolis Park & Recreation Board for the Non-Motorized Transportation Pilot Program, a program designed to create “…a network of non-motorized transportation infrastructure facilities, including sidewalks, bicycle lanes, and pedestrian and bicycle trails, that connect directly with transit stations, schools, residences, businesses, recreation areas, and other community activity centers….” The Traffic and Transportation Committee sought funds specifically to install sidewalks along South Wayzata Blvd (i.e., the I-394 south frontage road) and West Chestnut Ave, from Penn to Xerxes. The Committee awaits the results of the City’s prioritization of these proposed pedestrian projects.

Environment Committee
NRP funds were leveraged in Phase 2 to maintain the gardens throughout the neighborhood and the planters downtown that were originally created in Phase 1.

Gardens
Moreover, a new garden was created at Upton and South Cedar Lake Road, fittingly called Upton Garden. Many neighbors volunteered their time and money to design the garden, purchase the trees and shrubs, and then did the hard work of planting the garden in the summer of 2007. NRP funds were used to pay for renting the excavation equipment and additional funds will be used to pay for future maintenance.

Greening the Urban Space
One idea currently being pursued is a plan to install prairie grass and other drought-tolerant plant species along the south side of the north I-394 frontage road, between Upton Ave and Theo Wirth Parkway. The goal is to replace the existing higher maintenance grasses and plants and thereby reduce the Park Board’s costs of maintaining this area.

A second idea currently being worked on is a potential partnership with the Park Board, Tree Trust and other organizations, to plant more trees in Bryn Mawr. The plan calls for a repopulation of the boulevards with appropriate trees, and encouragement/assistance to neighbors to plant appropriate trees on their own land. The Environment Committee believes that additional trees are needed to combat global warming and the loss of trees due to the ongoing (or anticipated) impact of Dutch Elm disease, Oak Wilt and the Emerald Ash borer problem. The Minneapolis Park & Recreation Board Commissioner Anita Tabb is in full support of both projects and is assisting in these efforts.