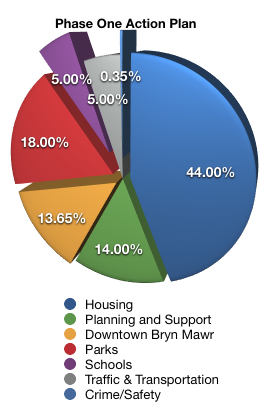 Summary of Phase 1 Success
Thousands of volunteer hours multiplied the impact that the NRP funds generated in Bryn Mawr. This section summarizes the highlights of Phase 1. To learn more about what was accomplished in the first phase of the NRP program in Bryn Mawr, please see the Phase 1 Report.

Housing Committee
The BMNA rolled out the NRP funded Home Improvement Program in three phases over three years (1998, 1999 and 2000). The Center for Energy and Environment (CEE) administered the program, and approximately 35 income-qualified households in Bryn Mawr were awarded funds to repair or upgrade their homes. The repairs and upgrades included: new roofs, electrical, furnaces, windows, siding, doors, fences, and paint, as well as sidewalks and driveways. At the same time, neighbors benefited by an increase in safety and improved home values.
Park & Recreation Committee

Bryn Mawr is surrounded by park land, so a great effort was put into removing invasive species of plants (e.g., buckthorn, mustard) and replacing them with native plantings (e.g., dogwood, oak, numerous perennials, etc.). Bassetts Creek Park was a particular area of concern in Phase 1, as several rounds of buckthorn busting and native species plantings occurred.

Through a partnership with the Minnesota Department of Transportation, City of Minneapolis, Minneapolis Park & Recreation Board, concrete planters were installed in medians on Penn Ave on both the north and south sides of the I-394 bridge. Neighborhood volunteers maintain perennials in the concrete planters, which were installed to create a more human-friendly design, reminding drivers that pedestrians and bikers share this space, and to generally help calm traffic around the Penn Ave/I-394 bridge.

Additionally, volunteers planted a hedge on the hill on the west side of Penn Ave (north of the I-394 interchange) that spells out the neighborhood name: B-R-Y-N M-A-W-R, and surrounded it with perennials. The hedges help to establish neighborhood identity, provide varied green space, and communicate to visitors that they are entering a calm neighborhood environment.

Working in concert with the Minneapolis Traffic Police, BMNA volunteers documented the speed of traffic on Penn Ave. The BMNA also requested that the city complete at least two traffic reports in the last three years (one report was received in July 2005 and the second in Spring of 2007).

Using NRP funds, the BMNA sponsored the creation of lawn signs, installed in homeowners’ front yards on Penn Ave (from Mt View to South Cedar Lake Road), that beckoned drivers to respect the local speed limits. At the request of the committee, temporary bump-outs were installed at the intersections of Penn and Mt View and Penn and Hawthorne. These bump-outs tested the feasibility of “throating” (or choking) traffic at these intersections. By all accounts the bump-outs achieved the goal of calming traffic, but due to budget issues with the city, permanent bump-outs were not installed and the temporary bump-outs were removed.

Downtown Committee
To enhance the vibrancy of the Penn and South Cedar Lake Rd intersection and maintain a pedestrian-friendly environment, the BMNA and Bryn Mawr Downtown Committee volunteers leveraged NRP funds to plant trees, perennials, and shrubs in the boulevard, and install pavers and planters filled with annual flowers.

Executing on NRP Phase 1 Action Plan strategies, grants were provided to businesses at this intersection and other business nodes in Bryn Mawr, to enhance their signage and improve their storefront facades.